Gosport managed to get us all close together and Oceansong was lucky as she was berthed in Souhaili’s annual berth (a bit of name dropping). All the boats were dressed overall and a competition was held to find the best dressed boat.  Fred and Yvonne from Tortola Star were the judges and decided that the rally organiser boat, Oceansong, was definitely the best as her flags were all in the correct order. 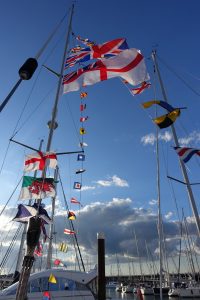 There was one glaring mistake that they didn’t spot however, so no prizes for spotting the fact that the Welsh flag was hoisted upside down!

However, the ladies of the party totally outshone the boats, dressed as they were in tiaras, pearls, and diamonds in honour of our Queen. They all looked fantastic.

The prize was a bottle of Strawberry Gin which we duly presented to ourselves at the pontoon party. Luckily we were holding on tight to the bottle as a 42 gun salute was set off at Portsmouth, just across the water. Lots of goodies were consumed at the pontoon party and then we all made our way across the High Street (encountering an urban fox on the way) to The Great Wall Chinese Restaurant where a delicious meal was consumed as we toasted Health to Her Majesty on the occasion of her Platinum Jubilee.

The following morning, Friday, a strong breeze was blowing and the short sail (or motor) across to Bembridge was fairly lively and not a little bumpy. We were joined by Steve, Lucy and their children on board ‘Allusion’, with Oceansong being the last to arrive, as we had caught something in our prop on the way over which slowed us down. Once berthed ‘SeaStart’ was called and managed to get to us the following morning from The Hamble, despite strong winds and rough seas on the way. Rob the diver disappeared underneath Oceansong and released a clump of weed which had managed to hitch a ride.

We had the prize of strawberry gin to dispose of, as well as a couple of other types of gin which had been lurking on Oceansong; Sandra from Blau Maus had made dozens of amazing cupcakes; so we had an impromptu Gin and Cupcake Fest on board Oceansong. It was pouring with rain so we all sat outside in the cockpit with our umbrellas shielding us, with Steve from Omnishambles regaling us with stories of his rabbit ‘Roo’…poor thing. 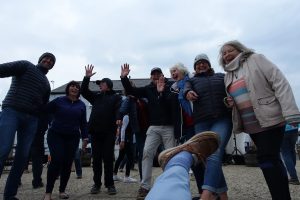 The next day, the Rock the Boat event, dawned cloudy, blustery and showery, but undaunted we all made our way up to the hard standing area where the dance was being held. A sharp wind was whistling through the gap in the buildings but The BOA’ers are a hardy lot.

However, it did get a bit cold so David sweetly suggested he got something warmer for me to put on. I have an abiding memory of a cuddly dalek type figure dancing along the pontoon on his way back to the event covered in a large size duvet. I have to say, that when he appeared on the top of the ramp, he brought the house down. Gordon, the harbourmaster, was beside himself in hysterics (I am not sure if it was laughter or tears). David then proceeded to dance along to the music of the band Hot Pocket, covered in the duvet and was joined by several children who were quite transfixed. I do think they thought he was a cuddly dalek. Henceforward the Rock the Boat event will be known as the Duver Duvet Danceathon……and David forever known as Duvetman! 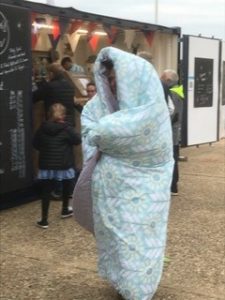 The band Hot Pocket was superb, and the rock music brought everyone onto the dance floor, especially our ralliers, who are ready for fun at any time.

A fantastic time was had by everyone and we can’t wait to repeat the rally next year, so, don’t forget to bring your duvets!

Click HERE to view more images of the weekend.